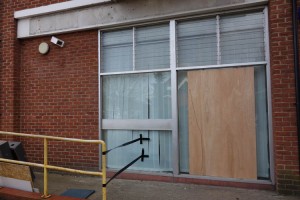 After my article on my disappointment at the state of the boarded-up ex-Barclays Bank branch, I was involved in a friendly twitter exchange with Barclays Bank, in which they suggested I register a complaint online.

This I did. Pretty quickly afterwards I received a phone call from Barclays customer complaints team. The Barclays view, was that they no longer had responsibility for the property, and that nothing could now be done to meet my complaint.

My complaint, which I stated again, is that the board covering the place where the cash machine was covered by an unpainted piece of plywood, presenting a most unattractive aspect in our village centre.

My second argument was that the contractors removing the Barclays Bank equipment, being presumably agents of Barclays were obviously charged to secure the building on removal of Barclays kit. Therefore, what instructions were given to them, and are they at fault. Also, most commercial leases are repairing leases, inasmuch, that the lessee is required to return the property to its state on the day they signed the lease.

While this point stalled the customer services representative’s argument. It didn’t win the argument. So, it looks like a letter is needed to members of the Barclays Executive Board.

All this palaver for a lick of paint.

If Barclays retain their ATM in the village, that will be a small and worthwhile victory.

View this document on Scribd

As I’m sure you know, Barclays have announced their intention to close their branch in Lightwater on the 27th March 2015. I’ve already written about this in detail HERE.

The Lightwater Business Association [LBA] is objecting to the loss of branch banking services in Lightwater. It has organised a petition, online HERE, which is also accessible through www.lightwaterlocal.co.uk, and also in most local shops in Lightwater. Do please register your support by signing the petition.

Writing to Anthony Jenkins, the CEO of Barclays Bank at, 1 Churchill Place, London, E14 5HP, the LBA received a reply to facilitate a meeting with the Barclays Community Leader, Matthew Bell, at the Barclays Bank in Camberley.

That meeting took place last week between Tim Salter, chairman of the LBA, Mike Duffy of Duffy’s Budgens, and Karen Whelan, Chief Executive of Surrey Heath Borough Council. The result of which was disappointing in that Matthew Bell said that the closure of the branch was continuing. To which the LBA have written again to Anthony Jenkins, presenting their case in greater detail. Here’s that letter,

View this document on Scribd 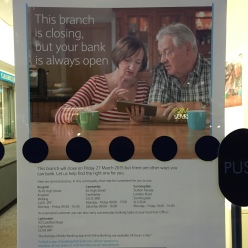 Thinking more about Mike Duffy’s excellent interview on BBC Radio Surrey yesterday, I thought how short-sighted of Barclays Bank to close their branch without making any effort to increase business in the branch.

I’ve just answered some questions on the closure to a reporter from the Camberley News. Good on them for picking up on this issue.

Among the comments I made to the Camberley News were,

I said more, but can’t now remember what I said. I’ll have to buy the newspaper to check.

The Lightwater Business Association [LBA] has asked for a meeting with Barclays Bank to understand why their branch in Lightwater is due to close on March 27th 2015.

The LBA is offering to help Barclays to keep their branch open with ways to increase business at the branch. So far Barclays has not responded. This offer and more was made by Mike Duffy in an interview on BBC Radio Surrey this morning.

Well done to Mike Duffy, he presented his arguments succinctly, mentioning that the LBA is backing on online petition to Barclays objecting to the closure

I bank with Barclays, so that’s why I received a letter today informing me that the Lightwater branch will close on Friday 27th March 2015.

Disappointing and annoying news. I guess even lucky Lightwater is not immune from changes. Below is part of Barclays letter to me. They recommend using Knaphill branch, but it has very poor parking. I expect my chum Surinder at Lightwater Post Office will b e doing more business. 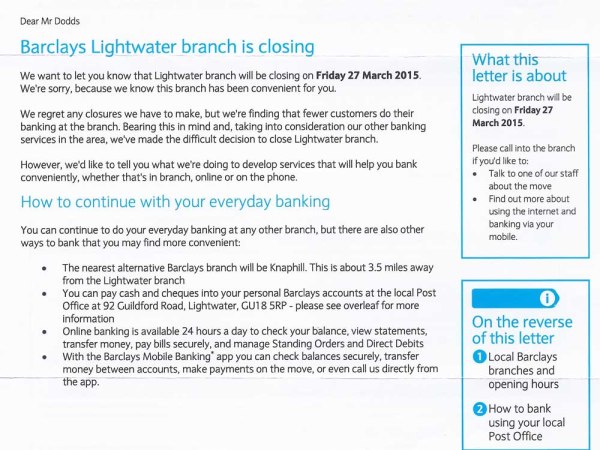 This is taken from – The Epicurean Dealmaker – the excellent blog of a contrarian and pseudonymous investment banker.

On November 21st the Daily Telegraph reported on a New blow for Co-op as the ethical bank is panned in nationwide saving product review. It’s not surprising, given that the chairman from 2009 to June 2013 has been exposed as having little banking or business experience.

Despite its stance as an “ethical” organisation the Co-op failed to score even ‘One Star’ for either its savings accounts, current accounts, personal loans or credit cards.

Needing to regain the respect of their customers, it’s pleasing to read that many banks have improved products they offer to the public – though, in my experience, there’s much improvement needed with their call centres. The Foundation’s chief executive, Antony Elliott, says,

“It is exciting to see the pace of product improvement really picking up now, just three years after we ran the first Ratings survey and granted the first Fairbanking Marks to the products that earned accreditation. It is also encouraging to think that nearly half a million people in the UK have taken out a banking product that we know from their fellow customers has made a real difference to how they manage or save their money. We have solid evidence now that our efforts are serving their purpose and that banking providers are increasingly keen on improving the extent to which their products help their customers.”

Co-op Bank customers can only hope that the Bank uses this opportunity to regain their trust, through a thorough review of the competences of their executives, and product offerings. They’ll need to rise up these Ratings when they are published for 2014.

It’s an amazing unfolding story about Paul Flowers, the Methodist minister, the ex-Labour councillor forced to resign over inappropriate behaviour, the ex-Co-op Bank chairman who had no credible banking experience, and then being serial drug-user and user of rent boys.

That our bank oversight and regulation is so weak that someone like Paul Flowers can be entrusted to run a high street bank is surely cause for national shame. 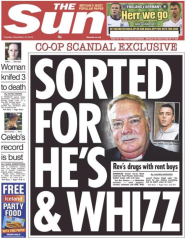 I’m in agreement with Charles Moore in The Spectator that it neither speaks well of our press and media, apart from the Daily Mail, who’ve signally failed to uncover these sordid details before, nor of what Moore calls the ‘rotten heart of the Labour movement’.

How pained must those upstanding and loyal Labour supporters feel about this. Although change will be promised no doubt. Where there’s politics involved there’s skulduggery too, as Tony Blair observed. So change will be an illusion.

Fewer Bonuses for Bankers in Britain is the headline in an article in DealB%k, a respected US financial blog. The article reports on the data researched by recruitment consultancy Morgan McKinley. Odd that this has been missed by the UK press. I found it in DealB%k, a blog in the New York Times stable, and it’s also available to read on Bloomberg. I guess it doesn’t fit the banker-bashing narrative of the UK press.

Here’s the article snippet from DealB%k,