Previously I said I was in a group of six for a special event. Now I can tell you it was for the launch of a blue plaque on The Lodge of Paddock Wood Finishing School in Lightwater.

It was quite an honour to be included in the group of six, which included the Surrey Heath Mayor, Curator of Surrey Heath Museum, the owners of the Lodge, the past school students organiser, and yours truly.

The Lodge was home, as it says on the Plaque, to many of the activities of the school. The placing of a plaque on the building is a fitting reminder of the role it played in the life of the school.

Here are photos of the Lodge, the plaque and the launch party of six. Click on the images to expand. The role of the Lodge within the school is described in the Welcome page of Paddock Wood Finishing School website.

I won’t retell the fascinating history of school and it’s associated lodge, as it is covered in depth HERE, HERE, and HERE.

PS: My wife asked the question of me, who took the photo. It was taken by a member of Windlesham & Camberley Camera Club, suitably distanced from the group of six.

I was at a lodge house this morning, in a group of six people, for a special event. I’ll tell you more later, as have to dash off to London.

Yes, Surrey Heath is a fine place to live, work, and bring up children. That said, we’re not good at caring for our history.

I won’t bore you with the milestones in our borough and the one that was intentionally damaged. Should you be interested in the topic, then enter ‘milestones’ in the search box at the top of this blog, and you’ll find more than you ever wanted to know.

Back to my grumble. In Brentmoor Heath we have a group of four Bronze-age bowl barrows that are around 4500 years old. They are a Scheduled Ancient Monument – see Historic England entry for details. Yet little can be seen of them, their being covered in scrub. There is a further scheduled monument bowl barrow [see details HERE] near the New England group of houses in Brentmoor Heath, it lies on a sandstone ridge overlooking the heathland, although it’s difficult to make out the barrow as a heathland track runs across it.

I’ve written about the four bowl barrows HERE, which includes references to learned papers and an article on bowl barrows in Surrey. I think we should make more of our ancient monuments, and keep them more in the condition shown in the aerial photograph of them taken in 1932. Here’s a recent photo of the bowl barrows showing how they’re covered in scrub, one of a few years ago when the scrub was cleared though not effectively, and an aerial photo of them in 1932.

I think I’ll have to write some letters and speak to a few people. You can do so also, if you feel minded

With our island being surrounded by sea, lighthouses are a vital coastal guide for mariners, and are much-loved by visitors.

We all know of the magnificent exploits of the builders of the famous Eddystone, and Bishop Rock lighthouses, and I expect each of us has a favourite lighthouse view.

Almost ten years ago we visited Orford Ness, a shingle spit on the Suffolk coast, used by the military for armament testing for decades. The spit’s lighthouse has protected mariners for more than 200 years.

On our visit we soon realised the threat posed to the lighthouse by shingle erosion. Winter storms do the damage, such that the lighthouse is in danger of collapsing into the sea. Iconic, a much overused word, is absolutely appropriate in this context. It’s location, so close to the sea that wants to claim it, marks it out as an icon of coastal erosion.

Orfordness lighthouse was acquired from Trinity House in 2013 by the Orfordness Lighthouse Trust, with the aim of saving as much of the lighthouse as possible. It is currently being dismantled, the eventual conclusion of which will be the collapsing the walls inwards to minimise the environmental impact on the shingle spit.

Here’s our photo of the lighthouse in 2011, and the current state of demolition. 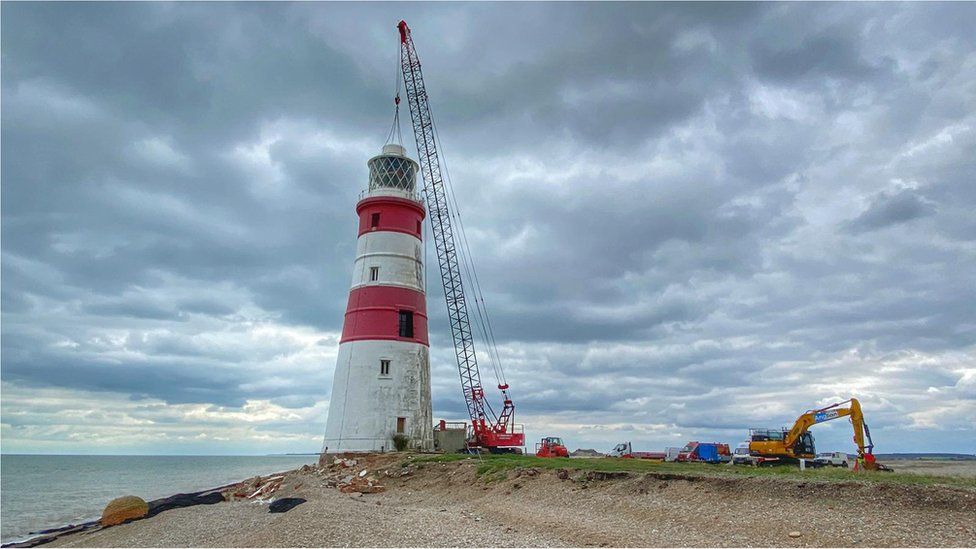 Today, yes, on this very day I wrote about visiting the Obelisk in Camberley, and lo and behold, Surrey Heath Borough Council tweeted twice today on the subject. Firstly about how the gates to the access path are locked in accordance with other local parks, namely 4.0pm for the Obelisk. Here’s their most recent tweet,

It was on a sunny day in November 2018 when I last visited the Obelisk that overlooks the centre of Camberley.

I saw on the Camberley Eye blog that work has been done to the approach to the Obelisk. Yesterday I checked out this work. Just in case there’s a reader who’s unaware of its location, here’s the description from the borough council,

Camberley Park, Knoll Road, Camberley GU15 3HD
Behind the Civic offices and Camberley library. A new park created as part of a housing development. A unique feature is the ruined Obelisk Tower situated on a hill overlooking Camberley. There is also a small children’s playground.

Before I show my photos of the path, I’ve a couple of comments. Trees and bushes again obscure the Obelisk from view from Camberley Park, a photo in my 2018 visit [see above] shows it unobscured. Nature is always keep to take over. My other comment is that when arriving at the Obelisk its view over Camberley is worthwhile, though the viewing area hasn’t had the investment that the fencing an path that you would expect. The viewing platform area is too small, there’s limited seating, no rubbish bin, and no information board. All missed opportunities.

Here are my photos of the path up to the Obelisk from the start up to the top,

Before writing, yesterday, about the buidings on the Southern stretch of Park Street in Camberley I should have looked at Mary Ann Bennett’s book Camberley – A History. Heck, I’ve a signed copy in our bookcase.

I’ve looked in the index for Park Street Stores and about Witwood, and have discovered useful additional information.

Firstly about Witwood.  On page 57 of her book, Mary Ann describes how building company Spear & King plus local bricklayer Mark Jacobs were responsible for erecting most of the houses in the Gordon Road area. Mary Ann continues,

The most impressive, Witwood, built in Park Street in 1898 for Major Crawford was designed by the eminent architect Sir Edwin Lutyens.

I think it looks more modern than having been built in 1898.

On page 98, of Camberley – A History, there’s this excellent photo of the Park Street Post Office and general store in 1950s, when owned by the Alborough family.

This short stretch of road from Pembroke Broadway to Park Road is the subject of my third in the series of Camberley views. There are buildings of historic and architectural interest, though only one, Witwood, is recognised in the Council’s List of Historic Buildings in Surrey Heath.

From Pembroke Broadway to the railway bridge the buildings are nondescript, perhaps excepting the one by the bridge with the unusual upper level window treatment.

Beyond the railway bridge there are four Victorian/Edwardian houses. While they are of “humble”, two-storey proportions, they never the less have interesting string courses and detailing in blue engineering bricks.

Immediately past these houses is a building occupied by a kitchen design and showroon. This was once Park Street Stores of which I’ve located photos of it in 1921 and 1979. Though it’s been modernised at the ground floor level, it is essentially unchanged over the years. Here are photos that show that [click on images to expand].

Further down the road toward Park Road we have a much admired Lutyens-designed house. I’ve written about Witwood, and show photos of it below, [again, click on image to expand].

Here are the photos of the other buildings on Park Street, which is pleasingly densely tree lined, The telephone exchange is the least atractive building.

The road from London to Exeter – the modern day A30 – passes through Bagshot. In the 17th and early 18th centuries the road crossed the sparsely populated Bagshot Heath, which afforded highway robbers opportunities to rob passing wealthy travellers.

While many a romanticised story, and inaccurate history, was told about highway robbers abounding in the 17th and 18th centuries. Bagshot Heath was the haunt for many years of The Golden Farmer a notorious highway robber. It is suggested that he acquired his sobriquet by paying his debts in gold. Mary Bennett, in her book, Life and Work in Surrey Heath suggests that it may derive from his ‘farming’ gold from travellers.

The Golden Farmer is thought to have farmed at the edge of Bagshot Heath, which Mary Bennett finds curious as the land was ‘totally unsuited to farming in the 17th century’. There is evidence that his name was John Bennet [no relation], alias William Freeman, or Hill. After years as a highway robber John Bennet was caught. Written evidence is that he was tried and executed in Salisbury Court, Fleet Street, London on the 22 December 1690 and subsequently his body hung in chains in Bagshot Heath for all to see.

Mary Bennett suggests that the Golden Farmer tavern was associated with John Bennet’s farmhouse. Later in 1814 to become The Jolly Farmer, which change is suggested by Surrey Heath Local History Club reflects the change from the Enclosure Acts. Maybe the tavern name change was to present it more favourably than association with a highway robber hung in chains nearby.

I’m sure you’ll know that when you follow a link to a YouTube video that there’s a range of video choices appearing on the right hand of the screen. That list of choices depends upon one’s previous selections.

Anyway, here’s one such choice I opened. It’s a documentary transmissed on BBC1 on Monday 10th July 1989 showing the record-breaking ‘A4’ No. 4468 “Mallard” hauling railtours on the beautiful Settle and Carlisle railway over the weekend of July 16th and 17th 1988.

What amazes is the size of the crowds watching Mallard. To my way of thinking it shows the enduring interest, nay love, that Brits have for steam engines.