The Chequers Cars site is a feature in Lightwater. Us Lightwaterans have seen the business grow over the years, taking over more of the site from Deepcut Garage, the previous whole site occupiers. While using the car wash on the site I learned that they were considering moving as they don’t own the site they trade from.

I’ve no knowledge of the plans for the site when Chequers have left, though it’s no stretch of imagination to see the site sold for housing. I’m sorry to see them leave Lightwater, and wish Chequers business good fortune, and am pleased that they’ve not left the Borough.

Here’s a photo, taken this morning (Sunday), of the site old Chequers site,

Last week members of the Camberley & District Probus Club were guests of a Jaguar Experience manufacturing tour of the Jaguar production facility in Castle Bromwich.

It’s riveting to watch robots build a motor car, in this case a Jaguar F-Type sports car. I say riveting because that’s what some of the robots were engaged in doing, using rivets to join aluminium panels together. The process was quiet as was, suprisingly, the whole factory. The most noise that was heard came from the horns of the electric fork lift trucks warning us to get out otf their way while they were delivering parts to the production line.

My first two employers were Midlands-based ‘metal bashers’, hence my dodgy hearing. No such thing as ear defenders then while having a conversation on a factory floor next to 400 ton Press Brakes.

The Castle Bromwich factory was built in the late 1930’s and became the shadow manufacturing site for Spitfire aircraft, producing 12,000 of them during the war. Parts of the original factory remain, including the piers at the site entrance. 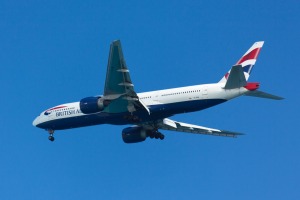 It makes interesting reading, reporting that London Heathrow features in five of the top 10 routes that last year generated the most revenue.

Top of the list is the billion dollar route between New York and London.

Yesterday I journed to central London, primarily to attend the AGM of Prudential plc, and afterwards to become a tourist.

The Board of Prudential plc presented an excellent report of trading for the last financial year, after which attendees enjoyed a small stand-up lunch, and had the opportunity to talk to the board members, both of which yours truly took advantage of.

I wandered round Parliament Square, up Whitehall, past the Treasury, past Horse Guards Parade, into the Mall, then into Trafalgar Square, finally ending with a short visit to the National Gallery.

Parliament Square was populated with tourists, as was St James’s Park, and Trafalgar Square. With warm sunshine to accompany their tourisical adventures, happy faces abounded, including mine too. There’s so much to see in these parts of central London.

I did get to sit in front of Seurat’s painting of The Bathers in the National Gallery, though not for long. It was like meeting an old friend. Here are a few of photos of my tourist adventure.

As a past Lightwater Business Association member I continue to receive invitations from them. Here’s one such,

For business owners in Lightwater and neighbouring areas

At the January 2019 meeting we got so pre-occupied with eating Pizza and drinking fine wine  hosted by Tony at Adriatico that we did not have time to do the quick fire 3 minute learning session.

The Tax Year end is approaching so we will have a  quick fire Tax Tips session delivered by Mike Loughton of Sir Tax Accountants Limited. I am sure all agree that 3 minutes is more than enough time to hear about Tax issues so hopefully it’s kept within the designated time.

If you’ve not attended one of our business networking evenings before, here’s what you can now expect:

Quick Reminder to Members
The LBA Networking Evenings are a benefit of your membership, and members can bring a non-member guest free to introduce the LBA to them. So, don’t forget to bring a business friend if you’d like to!

For Non-Members
We love to meet new business people from Lightwater and the surrounding areas and we welcome you to come and try a couple of our networking evenings free of charge. It’s a great way to meet LBA members – local business people just like you – and to find out more about the LBA, who we are and what we do. If you’re then interested, we’d love you to join as a member to benefit from what’s available to members.

For all attendees
Please make the most of the event and feel free to bring business cards and promotional literature / offers you might like to share with the group.

We look forward to seeing you on Tuesday 19th March 2019 at The Red Lion Pub in Lightwater.

P.P.S. If membership is not for you please do remember to still add your FREE listing on the Website. So, don’t miss out, be seen and found by the community in our FREE Directory.

I write this as in my googling about the film set in Deepcut Bridge Road, I came across articles, such as this one in the Guardian – Netflix hunts long-term UK production base amid race for studios – about the need for additional film studio capacity in the UK.

So, why not us in this part of Surrey.

Surrey Heath Borough Council [SHBC] announce their attendance at Revo Manchester on 18-20th September that offers opportunities to connect and do business with experts from the diverse retail property and placemaking community. See SHBC’s Be Inspired video at end of press release.

The regeneration of Camberley is bringing a revitalised place to one of the most affluent catchments in the South East of England.

Karen Whelan, Chief Executive, Surrey Heath Borough Council said:  “SHBC’s significant regeneration projects in Camberley are driving prosperity in the town and creating a vibrant place for our local communities to enjoy.   The regeneration work is also creating exceptional new commercial opportunities. Come and see us at Revo to find out more.”

Cllr Richard Brooks, Deputy Leader, Surrey Heath Borough Council said: “We are looking forward to attending the Revo exhibition next week to provide an update on the substantial progress that has been made on Camberley’s regeneration projects.  These projects are transforming the town and creating a great place for our local communities and businesses.”

SHBC’s investments have already seen the unique acquisition of The Square shopping centre, commencing its refurbishment programme within the first year of ownership.  Followed by an ambitious set of projects to improve the roads, pavements and street scene.  A redundant office building has also been purchased to create 116 high quality town centre apartments with proposals to re-deliver new business space.

SHBC is also currently in the process of sourcing an innovative developer partner for the London Road site.  Situated fronting the London Road, opposite the Royal Military Academy Sandhurst, the 5.5-acre site has the potential to create a mixed-use development.

The regeneration work is supported by a comprehensive events programme, grant schemes for independent businesses and cultural and enrichment projects to ensure Camberley is a key destination and experience.

Here’s a good news story about UK rail that’s contrary to the currently widely held view that the UK rail industry is a disaster.

Notwithstanding the debacle of new time table introduction by some train operators, more than 50% of the rolling stock – engines and carriages – will be new by March 2021.

In the report on the Long Term Passenger Rolling Stock Strategy for the Rail Industry sixth edition March 2018 by the Rail Delivery Group, is this, which I’ve taken from the excellent blog post The new trains dilemma (what to do with the old ones) by Paul Bigland.

The Rolling Stock Strategy report is over 50 pages, densely packed with a situation analysis, tables, and conclusions. In the report there are a few of things of interest,

So, all in all, the scene for the UK rail industry is positive, as long as the train operators can sort out timetabling issues.

Walkers over local heathland won’t fail to have noticed the pipeline markers that identify the route of Esso’s pipeline that takes jet fuel from the Esso Hawley Refinery in Southampton to the West London Storage Terminal near Heathrow. 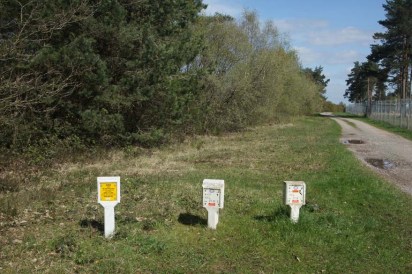 Esso are consulting on the best route to take in their project to replace the pipeline. See HERE for their proposals, including an interactive map of the alternative corridor options.  If you like maps, as many do, then you’ll find the interactive map offers much information.

Over the past few years there’s been investigations on the state of the pipeline, which I reported HERE, and can be seen in this photo of the uncovered pipeline adjacent to the junction of Old Bisley Road and the Maultway. [click on image to expand] 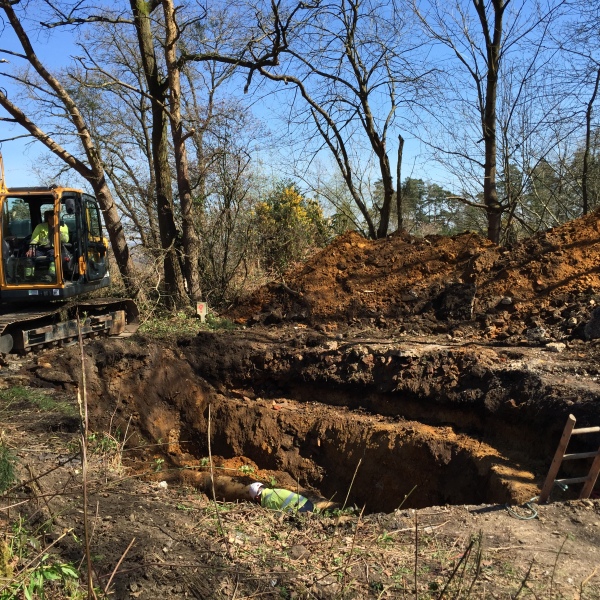 To date SHBC has invested £140 million into Camberley; which has already seen the acquisition and subsequent refurbishment of The Square shopping centre, substantial projects to improve the roads, pavements and public realm areas in the High Street and the redevelopment work that is about to commence converting Ashwood House into 116 high quality residential apartments.

The next stage of regenerating Camberley is investing in and improving the area along London Road (A30) between the High Street and Park Street.  To start this process SHBC will be looking to secure a development partner to deliver a major redevelopment of this gateway site.

Karen Whelan, CEO, SHBC said; “Camberley is rapidly transforming into a modern and improved place to live, do business and shop.  We envisage this is the start of a really exciting new development for London Road which will offer both residential and business opportunities.  The redevelopment of this site will also greatly improve the gateway to our town.”

This spring SHBC will be starting the formal process of selecting a development partner. Alongside this the Council is likely to be required to progress assembly of the site. SHBC have contacted the current owners and tenants currently occupying the buildings within the site and will be working with them to ensure affected businesses are relocated within the town wherever possible, including the opportunity to relocate temporarily if they would like to be part of the new development. We will keep everyone affected informed at each stage of the process.

Cllr Moira Gibson, Leader of the Council added; “It has been a key objective of the Council to drive forward and deliver positive change and regeneration projects to Camberley town centre.  The redevelopment of this key quarter will ensure the Council’s dynamic renewal work encompasses the entire town centre bringing improved economic prosperity to Camberley and all of Surrey Heath.”

Montagu Evans is advising Surrey Heath BC. Alan Harris, Partner and Head of Development at Montagu Evans, said: “Local authority-led regeneration is increasingly essential for the long term future of urban centres. Surrey Heath BC is leading the way in Camberley, taking a town-wide view, identifying key sites and creating strong partnerships that will help deliver high quality development. The 5-acre London Road site is a significant opportunity and we are expecting considerable interest in taking it forward.”