Of course you’ll know of Nelson’s Column standing proudly in Trafalgar Square. Though you might not know of some of the facts about it? Here are a few,

Constructed between 1840 and 1843 to a design by William Railton, it commemorates the death of Admiral Nelson in the victory over the French fleet at the Battle of Trafalgar in 1805. It wasn’t the first such memorial monument to Nelson, a 44m obelisk was erected in Glasgow in 1806 [see photo below].

The 5.5m tall statue of Admiral Nelson, atop the column, which faces down Whitehall towards the Admiralty, was sculpted by Edward Hodges Baily R.A from red sandstone from a now filled in Edinburgh quarry. The column is built from Dartmoor granite in the Corinthian style, characterised by slender fluted columns and elaborate capitals, which are decorated with Acanthus leaves and scrolls.

The column is 51.6m [169ft] high, and weighs 2500 tons. The pedestal is decorated with four bronze bas-relief panels, cast from captured French guns. They depict the Battle of Cape St Vincent, the Battle of the Nile, the Battle of Copenhagen, and the death of Nelson at Trafalgar.

The four bronze Barbary lions around its base were sculpted by Sir Edwin Landseer, and added in 1867. The lions are not identical. A consultant report to the greater London Authority in 2011 said that ‘considerable damage’ had been done to lions from tourists climbing over them. This action is not banned as will be seen on any visit to the column.

The Wikipedia entry on the column states that “Had Adolf Hitler succeeded in invading the UK during the Second World War, he planned to relocate Nelson’s Column from central London to Berlin”.

There are other monuments and columns erected to honour Admiral Nelson. The earliest was the column in Glasgow, erected just one year after his death. The others can be found in Edinburgh, Forres, Birmingham, Liverpool, Portsmouth, Hereford and Great Yarmouth. Famously there was a large monument to Admiral Nelson in Dublin, erected in 1809, and demolished in 1966 by a bomb. 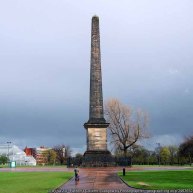 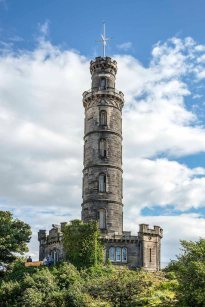 This photo quiz is, I consider, a pretty tough one. There are four plinths in Trafalgar Square, not including Nelson’s Column of course. Who or what is depicted on the four plinths. Answer later today.

For the answers to the Photo Quiz I have posted photos of the four plinths with the names on the statues, below them are the original quiz photos in thumbnail size. For more information about Trafalgar Square see HERE, and about the fourth plinth see HERE. Click on photos to enlarge. 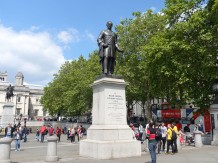 This, the second, in my short series of Ted Dearberg photos is of Trafalgar Square with ‘Carry on London’ and ‘Salute the Soldier’ propaganda hoardings on Nelson’s Column. Ted Dearberg/Imperial War Museum. Click on image to expand. 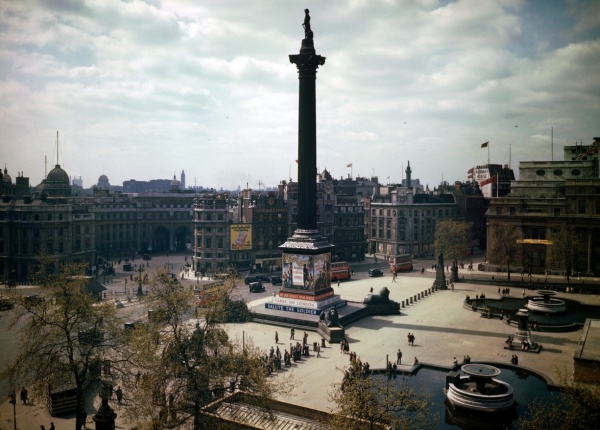