Following on from the previous article about pace sticking, and the World Pace Sticking Championships held this month at the Royal Military Academy Sandhurst, here’s a video of the championship winners – the Pakistan Army collecting their prizes.

Lifting their legs above their heads, a truly amazing feat. I asked the two RMAS Colour Sergeants, mentioned in my previous article about this, and they explained how they achieve the high leg kick, but said, they’re not sure they could do it.

Below the video is an article from Forces network on Pace Sticking: What is it really all about.

I’m repeating myself as I wrote, in detail HERE with a couple of videos, about the pace sticking demonstrations at the RMAS. 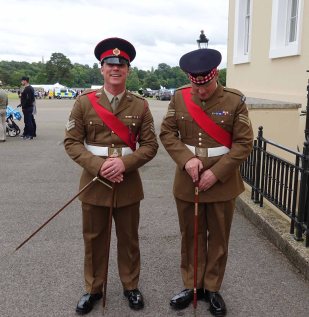 We both look forward to the pace sticking demonstration at the Royal Military Academy Sandhurst Heritage Day. We enjoy the precision in unity of marching with a pace stick, the perfection of smartness in the uniforms, and the approachability and affability of the soldiers.

I made a short video of the pace sticking demonstration, which is not that good I’m afraid as I wasn’t close enough to the action. We were pleased to talk to a couple of the Colour Sergeants in the pace sticking demo, both of whom were in the World Pace-sticking Championships in the Army video below. My inferior video follows.

The Colour Sergeants were proud to be at the Academy for their two year term, and we were delighted to talk to them – two top men.

Last week in the driving rain of an English Summer, military teams took part in the World Pace-sticking Championships at @RMASandhurst Despite the weather the professional teams from all over the Globe put in a masterful performance. Watch them here! pic.twitter.com/h05zPTlzzh

We return from a week away in a hot climate to attend the Heritage Day at the Royal Military Academy Sandhurst on a typically cool summer’s day.

Attendance at the Heritage Day seemed lower than in previous years. It can’t have helped that the day started with light rain, which thankfully soon passed, such that it remained dry for the rest of the day. There were fewer attractions this year, made up by a feast of band performances on the Old College square.

We enjoyed a Gurkha Bhat meal, always a treat at the Heritage Day, which we ate while watching a succession of bands and drums. Sadly the Royal Logistic Corps Silver Stars Parachute Display Team show was cancelled due to the windy conditions. Here are our photos of the day. There’ll be an article following about the pace sticking demonstration. 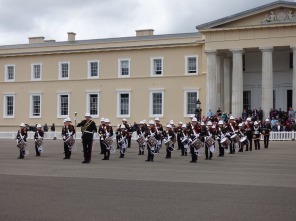 For readers who like to see pictures of military vehicles and soldiers, well, this is a mega-photo montage taken at the Royal Logistic Corps Open Day on Saturday 7th July.

When I say mega-montage, I mean it’s many more photos than I normally post. In fact, it’s 21 photos.

We enjoyed a Gurkha Curry, which was good value at just £4 per plate., and later on our visits to other attractions we stopped more than once for an ice-cool Pimms. 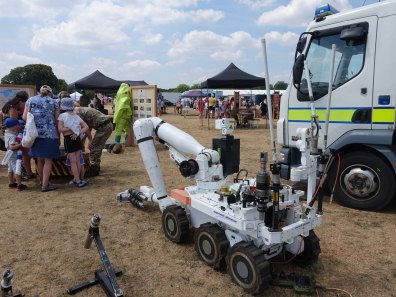 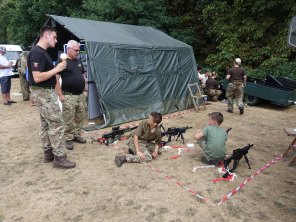 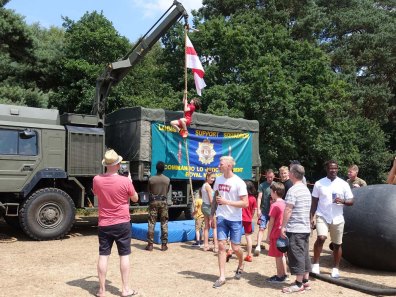 The Royal Logistic Corps Open Day last Saturday afforded me the pleasure of talking to the military, something from which I derive knowledge and pleasure.

There were support vehicles a plenty for the visitor to look at, and their drivers to talk to.  One of whom I enquired about his knowledge of the Thorneycroft Mighty Antar tank transporter, answer in return ‘never heard of it’.

Ah well, that makes me feel old. Thorneycroft were a British truck maker, absorbed into Leyland, hence its demise. The Mighty Antar served as the British Army’s tank transporter for four decades after World War II, replaced by Scammell Commander in the 1980’s.

My best story about tank transporters is when I was about six or seven and on my way to junior school. The road to school had a short, though steepish hill. One day I crossed the road and saw a tank transporter creeping up the hill. It was moving at walking pace. So I walked with it until it gained speed on level ground. The lorry was a steam lorry, which dropped cinders on the road. Steam emanated from various parts of the lorry. Even then seeing a working steam lorry was an unusual sight, which I think it was a Sentinel steam lorry. A fond memory.

From 2001 the British Army’s heavy equipment transporter has been the Oshkosh M1070F, and the photo below is of one of them.

We both wanted to celebrate Armed Forces Day, which was last Saturday, by being close to the military.

We considered attending either the events in Aldershot, or the Freedom Parade for the 2nd Battalion, The Princess of Wales’s Royal Regiment in Guildford. We chose Guildford. Surely there’s nothing finer that to witness our Army marching, and to see it in such a grand setting as Guildford’s High Street, what could be better.

Naughty me, I interrupted the procession of dignitaries to assemble outside Holy Trinity Church at the top of the High Street, well, it was the birthday of Cllr Nigel Manning, so I had to break into the procession to shake his hand and wish him well on his birthday. I did get a big, if embarrassed, smile.

We were well placed to witness the events. The march up the High Street, the welcome by the Mayor of Guildford, the response by Col Patrick Crowley, The Princess of Wales’s Royal Regt, and the review of the troops by Her Majesty’s Lord Lieutenant of Surrey Mr Michael More Molyneux Here are our photos of the parade.

Later I’ll post my video of the Freedom Parade, for which the glorious weather made it easy to film. 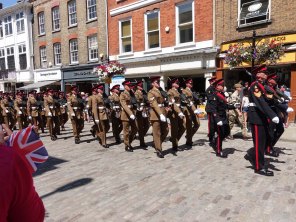 We enjoy the day, meeting soldiers, and friends from the RLC Museum, eating a Gurkha curry, and for me getting up close to the array of military equipment. 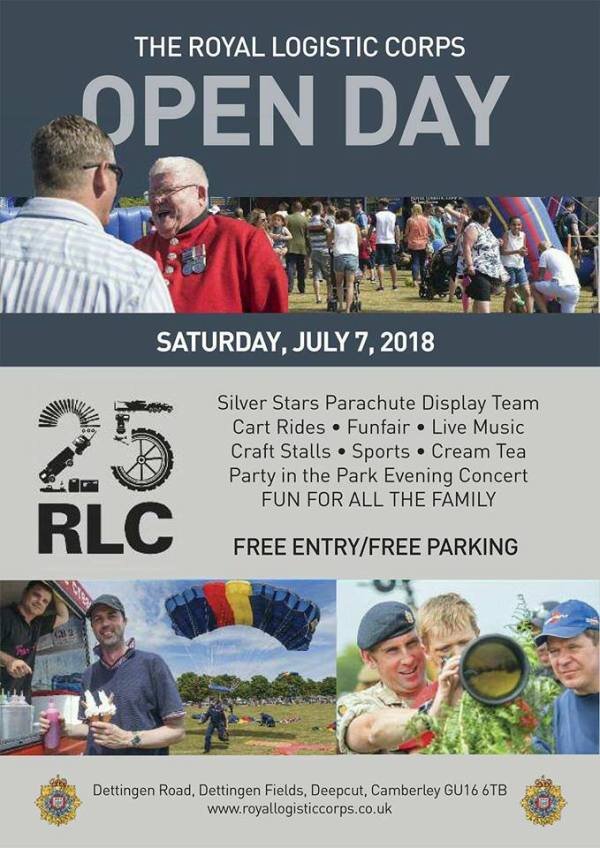 At the Royal Military Academy Sandhurst Heritage Day we enjoy the Colour Sergeants demonstrating marching with a pace stick. This year there was no pace sticking demonstration, much to our disappointment.

According to the diggerhistory website, a pace stick is,

The Regimental Sergeant Major of a Unit carries a ‘Pace Stick”, which originated in the Artillery as a “Gunner’s Stick” and was used to measure the distance between guns.

It was soon adapted to measure the length of the pace taken by soldiers to get them all pacing the same. The Pace Stick is actually two pieces of timber, hinged at the top and able to be set to a particular distance, something like the compass set you used at school.

Our loss was assuaged by friendly Colour Sergeant P Johnson of the Lancashire Regiment. Jany stopped by a couple of Sergeants to enquire about the pace sticking demonstration, for me to return to see her practicing with a pace stick. I too tried to use one, only to find that it’s not as easy that at first it would seem. Adeptness with your wrist is essential to use one

Should you like to know more, and see a pace stick demo at RMA Sandhurst, then look at my article HERE, when all is revealed. Here are a few photos of our efforts. 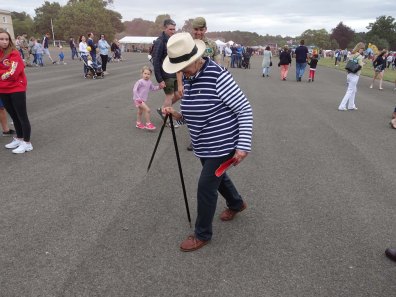 An overcast day for the Royal Military Academy Sandhurst Heritage Open Day. At least it didn’t rain. Many thousands of visitors enjoyed being in the company of the Army, it’s soldiers, cadets, bandsmen, and all things military.

The standout event of the day was the arrival of the parachutists of the REME Thunder Bolts Display Team. Amazing pinpoint landing accuracy, marvelled at by huge crowds around the landing arena, including us. So, so difficult to photograph them.

We admired the precision marching of the Band of the Parachute regiment from a nice front row seat. We wandered around Old College, including the impressive Conference Room and Indian Army Memorial Room.

We missed not being able to have a cream tea this year, and the queue for the Gurkha curry was a touch too long, so we watched the bands in the main arena. As I took lots of photos, I thought it best to present them as a slide show.

We also missed there being no pace sticking by the RSM’s and Colour Sergeants this year, but it was more than made up by …. oh, well, that’s the subject of the next article.

The bangs came from the 2nd Queen’s Royal Regiment of Foot re-enactment group. Much noise and smoke enjoyed by all.