Councillor Robin Perry was chosen as the 47th Mayor of Surrey Heath at the Annual Meeting of Surrey Heath Borough Council yesterday (Wed 15 May).  Cllr Perry has been a councillor for Town ward since 2015, and was last year’s Deputy Mayor.

Cllr Perry has spent most of his life in Camberley. He has built several successful businesses including a bakery, a chain of 25 Freezer Fare stores, County Kitchens, and various software businesses.

In recent years he ran a team of small business advisors for Business Link, and acted as an Independent Non-Executive Director for a number of businesses. He has for many years been an active member of the fundraising charity Round Table 41 Club, served as a trustee for various local charities and chaired the Board of Governors for a federation of local schools.

Cllr Perry was married to his wife Helga for 49 years until her death in 2013, and has two sons and six grandchildren. He now shares his life with his partner Jill, who will accompany him throughout his Mayoral year.

END_OF_DOCUMENT_TOKEN_TO_BE_REPLACED

Cllr Adams has been a councillor for St Paul’s ward since 2015, and was last year’s Deputy Mayor for Surrey Heath. At the Mayor-making ceremony, Cllr Adams was sworn in as Mayor of Surrey Heath for the forthcoming year, receiving the Mayoral robe and chain of office.

Cllr Adams spent most of his childhood living in Tanzania, East Africa, whilst his father worked on a Swedish aid project. Upon his return he attended secondary school near Dorking before moving to Surrey Heath.

Since his election in 2015, Cllr Adams has served on various committees including Performance and Finance, Planning, Licensing, Audit and Standards, and was vice-chair of the External Partnerships committee from 2015-17.

Cllr Adams manages and operates Conquest Consultancy, a social media management company. He has two sons, and is married to Sarah who works in local community dental services. They live in Camberley with their beloved cocker spaniel, Mitzi – who may well appear at Mayoral events in the coming year!

During his mayoral year, Cllr Adams intends to shine a light on the fantastic community spirit that exists throughout Surrey Heath, encompassing community projects & services, and celebrating the huge number of volunteers that do so much throughout the Borough.

Cllr Adams said: “It is with great pride that I take up this mantle as the 46th Mayor of Surrey Heath. I am extremely proud to represent this great little corner of England we’re lucky enough to call home, and I’m excited to champion Surrey Heath’s amazing, inspirational people & businesses.”

Cllr Adams has chosen three charities to support during the year:

Outgoing Mayor Cllr Valerie White said: “This past year as Mayor has enabled me to meet people and go to places I would never experienced in my normal life.  It has been an honour to represent the Borough at many events outside our area.

“The number of voluntary organisations I have visited has been eye opening. Without these amazing people, life would be so different in our Borough. Thank you to every organisation in the Borough who welcomed me to their events with such enthusiasm. I would like to wish Cllr. Adams all the very best for his upcoming Mayoral year.”

Further information on the Mayor of Surrey Heath can be found at www.surreyheath.gov.uk/mayor.

Should you be a reader here, you’ll know, and perhaps be bored of, myself and my chum Reg Davis cleaning and painting nine milestones in Surrey Heath.

Motivated, both, by the loss of a milestone on the A30 in Yorktown we set about the task, which was harder work, and took longer than we’d both anticipated. Our excellent Surrey Heath Museum manager, Gillian Riding, unbeknownst to us, arranged for a press release about our accomplishment, and a small gift presented to us by the mayor. Here’s the press release, and it’s accompanying photo. Click to expand. 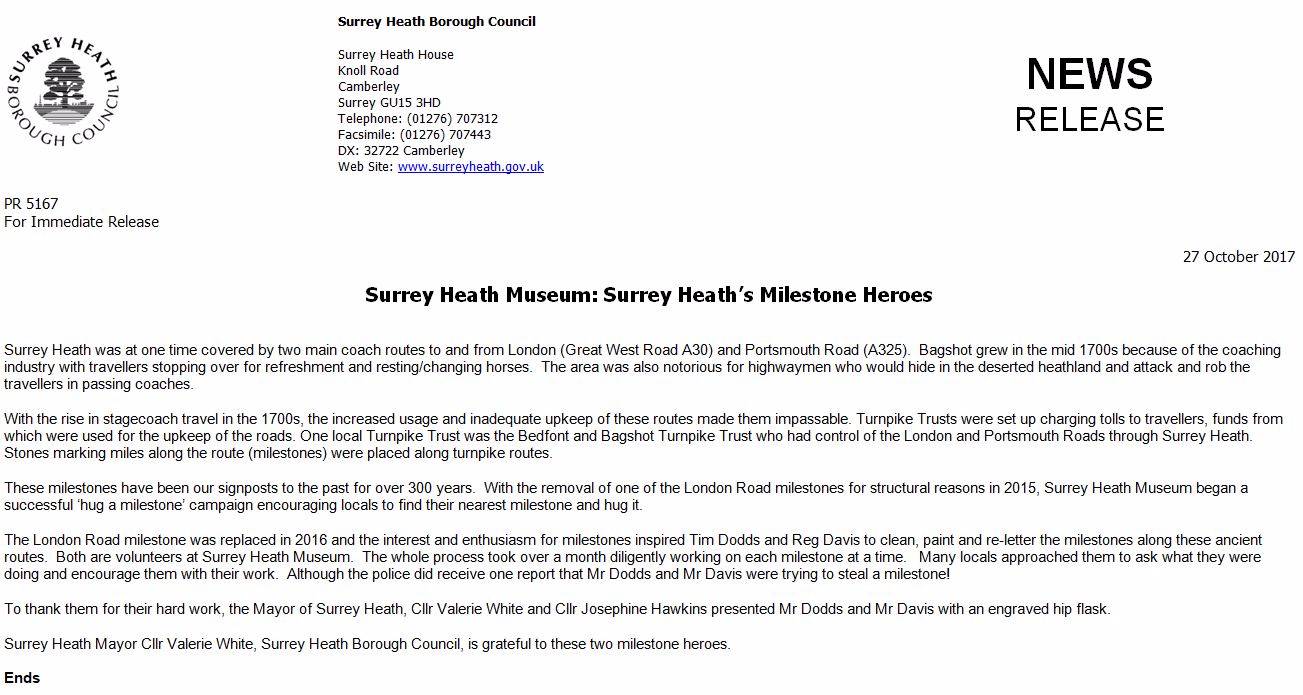 This looks like a pleasant evening, and all for good causes.

You meet friends and acquaintances at the Surrey Heath Show – a pleasant diversion. As I’ve done in previous years I snapped a few items of interest at the show, as we wandered around the show.

The Woking cacti society stand held us in deep conversation for quite a while, during which we bought more cacti and succulents. At the rear of their stand they had stunning large cacti, many in bloom. However, the ones we bought were small – space is a consideration for us and our growing cacti collection.

We were happy to bump into show organiser Tony Moore, a chance to congratulate him on his being awarded a BEM. The Mayor, Cllr Valerie White, chose a 1962 Vauxhall Cresta as her pick of cars in the classic car show. Here’s my phot montage,

Yesterday evening we attended the annual council meeting of Surrey Heath Borough Council. The main item of the agenda is the installation of the Mayor for the ensuing year, and the selection of an accompanying Deputy Mayor.

The mayor making ceremony is an event of civic renewal, inasmuch that the incoming Mayor – Cllr Valerie White – and Deputy Mayor  – Cllr Dan Adams – commit themselves to serve the council and the community of Surrey Heath. The outgoing Mayor – Cllr John Winterton – gave the Council a brief report on his year of office, reflecting on the strong community spirit and volunteering of the people of Surrey Heath.

You can read the Council press release on the new Mayor and Deputy HERE. [Click on image to enlarge]

I’ve made a brief video of the event to provide a flavour of the Annual Meeting.

I the previous article I apologised for my embarrassing incompetence with technology. The short video below hopefully recovers some credibility. I was so lucky that Gillian Barnes-Riding spoke clearly, and the traffic noise while she spoke was not as intrusive as when the Mayor spoke. Had my audio been successful this would’ve been no problem. Ah, well. At least you’ve Gillian’s heartfelt thanks for those involved in the restoration. Below the video, I’ve posted the Mayor’s address.

Cllr John Winterton, Mayor of Surrey Heath, – address at the unveiling of the renovated milestone.

Thank you all for coming here today to celebrate the restoration of the London Road milestone. The original stone was removed for structural reasons in 2015. After much public support and funding from the Milestone Society, Surrey Heath Local History Club, Surrey Built Heritage Trust, Camberley Glass, and some private donors, we are able to be here today and acknowledge this ‘past signpost to the past.

The original milestone stood here from the mid 1700’s, when a ‘mile stone’ indicated to passing stagecoaches how many miles there were left to Bagshot of Hartford Bridge, depending on which direction they were travelling. Both places have changed significantly since that time, one has grown immensely, while the other has an airport. The road – now the A30 – was a toll road of the Great West Turnpike Road running from London to Exeter. People paid a fee to travel along the road. The Toll House – where you paid your fee – was near the entrance to Laundry Lane on the other side of London Road,

Behind this milestone a time capsule has been inserted into one of the bricks with information on the stagecoach industry locally, a new style £5 note, historic photos of York Town, a memory sticks of the journals offrom the Surrey Heath Local History Society, and press coverage of the removal of the stone, and the successful ‘hug-a-milestone campaign run by Surrey Heath Museum last year. There is also information on Camberley Glass and Windows, and Alfred Elliott, greengrocer, fruiterer and florist who ran a shop on the other side of the entrance to Camberley Glass from 1920s to 1980s.

Thank you all who have been involved in the milestone re-creation, including Rob Predgen from Camberley Glass, Peter Greatbatch, Tim Steggles, and Haven memorials.

Camberley Glass have kindly organised light refreshments in their showroom, following the blessing by the Vicar of St Michael’s Church, the Rev Bruce Nicole.

I do like to support the Mayor, where I can. Perfect timing, dear wife away for the day so no need to arrange my own lunch.

I was a late arrival at yesterday’s Fayre in the Square in Lightwater. Even so, I found happy crowds circulating the stalls and watching the dancers and singers.

It was a pleasure to see Cllr John Winterton, the Mayor of Surrey Heath, spending time with stallholders and visitors. I bought mulled wine from the Lightwater Business Association stall, a necessity given the rather nippy temperature. Here are a few photos of the event. Lightwater Fayres are good for people meeting – had plenty of enjoyable conversations.   [Click on image to expand]

I attended Surrey Heath Borough Council’s December Council meeting yesterday evening, and was invited to join the Mayor for mince pies after the meeting.

Joanne said that she visited old friends for a weekend some months ago, and learned that the husband had been a Mayor of his borough. Conversations naturally developed around mayoralties. It’s in these that Joanne learned all about how to involve the youth of the borough in local government, and the process of creating Young Mayors.

Joanne involved local schools in having them elect both roles, a Young Mayor, and a Young Deputy Mayor. I didn’t get a chance to find out how Joanne hopes to involve them in her Mayoralty. I feel sure they’ll joining her at specific events. Top marks Joanne, for a splendid initiative.

The Young Mayor is Jonathan Quinn, and the Young Deputy Mayor is Phoebe Evason. Both of whose proud parents were at the council meeting to see them awarded their badges of office. Here’s my photo montage of the council meeting and the young mayors. Apologies for poor picture quality.