Continuing my pleasure of finding things out, I’ve discovered something about the Broad Arrow used by the British military. The Broad Arrow is shown on the photo of a boundary stone.

The arrow is also known as a pheon, which is a heraldic representation of the head of a downward facing javelin, dart, or arrow point. I discovered this description – online of course,

The origin and earliest use of the broad arrow symbol are unknown. It could be related to the actual arrow, longbows and bowmen being a key part of the English army in the Middle ages. Broad Arrow Tower, built by Henry III of England between 1238 and 1272, in the Tower of London is said to be named after the royal property mark. Early use of the broad arrow can be found on some objects recovered from the Tudor ship Mary Rose, which sank in 1545.

The Broad Arrow is still in use by the British military, as this 1980’s specification shows, 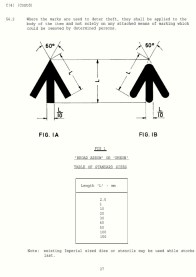