The panel answered dozens of questions during the hour-long session, and areas discussed included a wide range of subjects including the regeneration of Camberley Town Centre, including SHBC’s investment in the recently renamed shopping centre The Square.

The Council’s strategy of delivering efficiency and increasing income to continue to provide a wide range of services in a climate of drastically reduced Government funding was also addressed.

The Council’s work supporting economic development in Surrey Heath was another focus, including the recent Camberley Enterprise Expo and Business Breakfast event.

During the event, broadcast via Facebook Live from the Council Chamber at Surrey Heath House, members of the public could follow the live video stream on the SHBC Facebook page www.facebook.com/surreyheath. Cllr Brooks said: “We appreciated the engagement from the public, hearing people’s views and answering their questions at this latest #TalkSurreyHeath event.”

Businesses connected with Frimley are invited to attend a meeting of the newly formed Frimley Business Association. [Click on the image to expand]

Here’s wishing the new association well. As a past member of the Lightwater Business Association – and occasional visitor to their events – I recognise the value of business associations. While the number of members of such organisations is small, their value is as a voice for business in their area, and as support to each other.

The following flourishing village business associations in Surrey Heath have the active support of the economic development team at Surrey Heath Borough Council, and all of whom hold regular business networking events,

With the Chancellor of the Exchequer offering further support for small business in his Autumn Statement. It’s worth reminding Surrey Heath’s small business owners that the Surrey Heath Borough Council’s Economic Development Team is there to help. There’re happy to discuss, 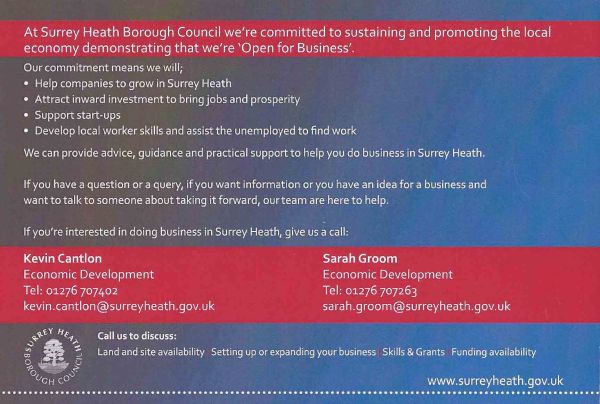 Lightwater, as I’m sure readers will know, is a small semi-urban village of around 6,500 people.

Our advantages are being handily placed to junction 3 of the M3, and being surrounded by heathland, which is great for leisure pursuits.

Ok, that’s the sales pitch done. The really surprising thing is that Tesco, Marks & Spencer, and the Post Office have identified the village for significant investment. Amazingly there’s even a house for sale in the middle of the village centre – space for more development.

Here’s an update on the changes to the village.

Now I must dust off my report on car parking provision in the village centre and seek investment to create more of it, and improve the street scene. 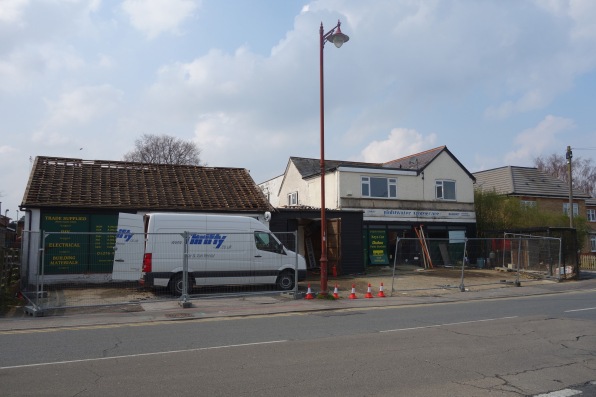 I might’ve said this here before, that towns and cities need wider economic development policies that simply regenerating their retail town centres.

What we need are policies that bring people into our towns, who aren’t all shoppers, but people who work or live there. There’s a trend for empty offices in Camberley to be converted in apartments. I fully understand that we need more homes; this though is at the cost of reducing the employment vibrancy of our town. Successful events that bring footfall to the town, such as the Camberley Car Show, are great. They are not the whole answer.

A while back I reviewed the report on the Future of Cities, not wholly appropriate to small towns. Really usefully a new report – Future of the High Street – by the Future Spaces Foundation suggests policymakers should focus on a broader footfall for towns than just retail. This is just the approach  we need.

END_OF_DOCUMENT_TOKEN_TO_BE_REPLACED

I like well expressed economic arguments. Particularly ones that are succinct and easily understood by the general public.

I’ve no hesitation in directing you to editor of City A.M. Allister Heath’s article Why governor’s monetary revolution will eventually backfire.  It’s a critical assessment of the bank of England’s new monetary policy.

One part of Allister Heath’s critique is the use of unemployment rate as the new target for setting interest rates, being “a decent, easy to measure proxy for spare capacity”. It’s his description of the spare capacity in the economy where I fully agree,  when he says,

“I don’t think there is much spare capacity that would be put to use even if demand were to be buoyant, especially in our open economy. Much capital – human and physical – isn’t lying idle but has been destroyed. There is a mismatch between people and jobs. The lost output and potential growth is gone forever.”

Where I disagree is not so much in terms of economics, but in in the power human nature, when optimism and confidence take hold.

While I agree that the spare capacity in the economy is gone. I disagree that the majority of supply-side growth will come from imports. Sure, our addiction to imported goods will continue.  There’s reasonable evidence that there’s some rebuilding of capacity occurring in the UK. John Lewis repatriating textile manufacture back to the UK, being one such example.

The aim of the ‘forward direction’ on interest rates is aimed at boosting confidence in all aspects of the economy. Optimism and confidence are the vital underpinnings to rebuild the lost capacity in the economy. The shape of our economy has changed forever, we’re in a post industrial phase of development. It’s the services sector, including media and high tech parts that will provide the balancing export wealth to pay for the imports.

I agree that the new policies of the Bank of England contain risks. But the twin focus on employment rate, and interest rate should be given a chance to work.

As Liam Halligan said recently in the Daily Telegraph, the UK has avoided the economic meltdown like Spain, Greece, and other European countries. He continues,

“The Government can’t live without growth, yet nor can it seem to contemplate the bold actions that would snap the UK out of its torpor. We find ourselves, then, in a complex predicament – not easy to sum up in a headline.”

The way that Liam Halligan suggests that UK economy will return to growth is when our big banks are restructured. It’s been Liam’s argument for years that because the banks are hiding huge losses they are, “failing to provide the fresh working capital needed for viable companies to expand and to finance new and productive projects”.

I agree with Liam about the state of our big banks. Unlike him I do see change taking place in the UK banking sector. It’s taken time, but the personnel changes at the top of many banks, the many investigations, and changes to their operating cultures are likely to be positive for business lending. Not fast enough you can argue. UK banks are changing, unlike European counterparts Dexia, Anglo-Irish, who are still being bailed out by the taxpayer.

I’m heartened, as I believe Liam Halligan should be, that the Chancellor, George Osborne, is considering breaking up RBS. I’m sure for many of us, reform of UK banking remains an important topic, one that’s taking too long to fix.

We shouldn’t neglect to remember the damage that Gordon Brown did to UK banking, HERE, HERE, and HERE.

For the last few years there’s been considerable talk about the strength of emerging economies, and how they’re the saviour of the world’s economy.

It’s true there has been startling growth in the BRICS economies [Brazil, Russia, India, China, and South Africa]. While I believe this optimism has clouded certain realities about the nature of the societies in those countries, where there remain unresolved huge cultural and structural issues.

As the world’s first post-industrial economy, I think we should be combining that experience with our trading relations. Not in condescending way, but from painful experience. Look back to Victorian times where we overcame pernicious things like child labour exploitation, and developed local government. Education is always part of the answer. Maybe we should think about establishing branches of our colleges and universities overseas, in addition to attracting overseas students here.

Let’s look at each of the BRICS:

Optimism is fine. Realism is its fairest check.

Perhaps a bit heavy for a gloriously sunny Friday, but here’s an interesting index – Index of Economic Freedom – about our national performance on economic freedom, relative to other nations.

Looks like we’re moving in the wrong direction, which the Index sees as mostly resulting from high taxes and excessive government spending.

Fascinating to see even though the UK is 16th that Germany are 23rd, and France a lowly 64th.

I’m now only an occasional watcher of the BBC’s Newsnight programme. But I did see last week the clash between Professor David Blanchflower and Matthew Hancock MP. Blanchflower was typically immoderate in his language, while Hancock was remarkably restrained under Blanchflower’s barrage.

Blanchflower persistently said that the imminent announcement of the numbers of the first quarter of 2011’s GDP growth of the UK economy, would surely indicate a downturn, and therefore presage a double-dip recession for the economy.

The GDP numbers, announced today, are very encouraging. They show that manufacturing production grew by 1.1%, services growing by 0.8%, and it was only construction shrinking by 4.7% that kept the overall growth low.

The vital ingredient to private sector growth is confidence. Not the misnamed use of the word investment by Gordon Brown, which was in reality government spending. Since the Treasury has no more money, as Labour’s Liam Byrne remarked, it’s the private sector from where we need growth.

The detail in the 1st Qtr GDP numbers supports the government’s case that future growth can come from the private sector. Manufacturing, business services, agriculture/forestry/fishing, and post and telecomms, all saw healthy growth numbers of over 1%. Surprisingly, even the government contributed 0.7% to the growth numbers.

I doubt Newsnight will re-stage the discussion between Blanchflower and Hancock. Good news is not what Newsnight focusses on.