After a wait of six years, apart from a hiatus when Tesco placed building materials on the site, the old Lightwater Homecare site looks as though there will be buildings on the site.

The eyesore for so many years looks like coming to an end. The Surrey Heath planning application – 19/0202 – 89-91 Guildford Road, Lightwater, has been approved for 3 four bedroom, and 2 three bedroom dwellings. Below the photo of the site I took yesterday, are the site plans. I note, in reading DECISION NOTICE, that the original application was for 3 three bedroom and 2 two bedroom dwellings, later modified, without any change in car parking provision. Originally 10 places for 13 bedrooms, and now 10 places for 18 bedrooms. The modification was objected to by Windlesham Parish Council, but allowed by the Borough Council.

Please understand, I’m not against the development, after all these years waiting who would be. It’s just that I think local planners fail to consider the pressure on parking in the centre of Lightwater. Where will visitors to these new homes park, when most homes in Lightwater own two cars, necessitating on street parking. 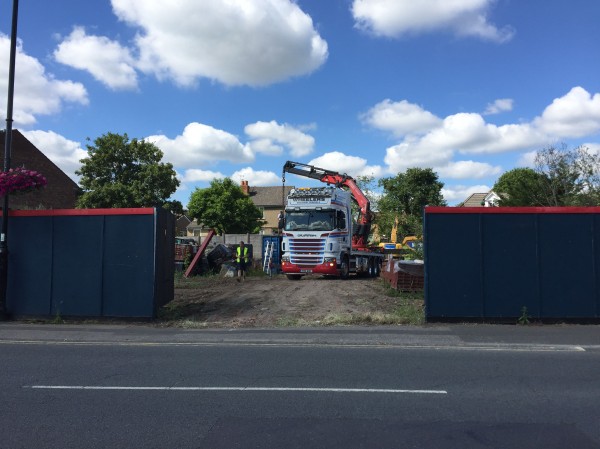 Car parking is the big bugbear in Lightwater. It’s something yours truly has campaigned about for many, many years. Goodness me, it was in 2010 I presented a report on the topic [See my report below photos] to Surrey County Council. Since then other local councillors have promised concerted action, but to no effect. Seems they’ve lost interest.

Nothing changed, except for more double yellow lines restricting parking places. Nearby Sunningdale shopping centre was similarly blighted by inadequate parking provision. The difference  is that their car parking has been improved. Just goes to show that an enlightened local authority recognises the need for car parking to boost retail vibrancy, and road safety. See photos below.

Don’t let highways argue that backing into the main road cause problems. It doesn’t, and Sunningdale proves it’s fine

I don’t need to post photos of car parking in Lightwater; you know how ugly and inadequate it is. Surrey Heath Borough Council seem to only to be interested in Camberley town centre, even to the extent of ripping up the perfectly adequate Knoll Walk. 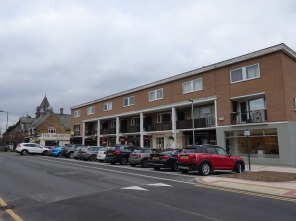 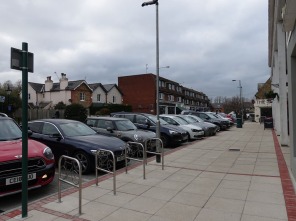 Click on the image below to link to the Surrey Heath Local Committee web page to view the agenda. 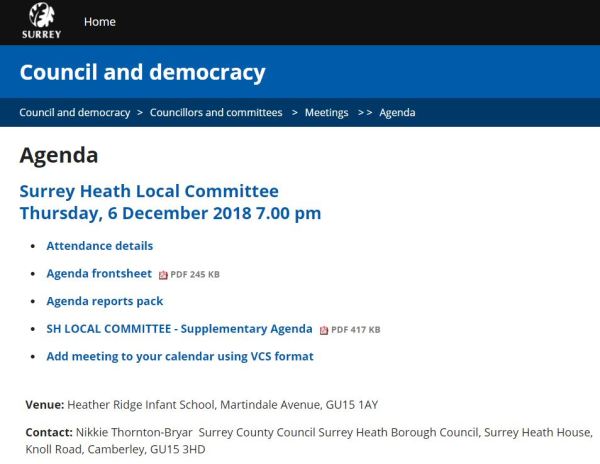 Surrey County Council’s parking team has reviewed on-street parking in Surrey Heath. Their proposals are presented to the Surrey Heath Local Committee, who will decide on their adoption. Prior to the next committee meeting on Thursday, 4 October 2018 at 7.00 pm, venue to be announced, there’s a public consultation about the proposals which concludes on the 12th September. The review identified changes which would benefit road safety and reduce instances of obstruction and localised congestion.

The proposals can be viewed HERE, and your comments can be submitted online HERE.

I’m aware of many of the pressures in on street parking in the borough, obviously in Lightwater, but also in Bagshot. Councillors have been particularly vocal in most of the proposals, pressing for parking restrictions in Lorry Ridge, Bagshot, and Lightwater Road in Lightwater. Of all the maps in the review, I’ve selected one for Lightwater, which shows the Lightwater Road proposed restrictions, about which the parking team say,

From the roundabout junction with Guildford Road to the junction with Derwent Road, introduce double yellow lines on both sides of the street to maintain traffic flow and sightlines for through traffic, particularly on the bend in the vicinity of the Lakeview Care Home, which has resulted in a number of complaints from members of the public with regards to traffic flow and sightline obstruction. The long extent of the proposed double yellow lines is to manage displacement of these parked vehicles, to ensure that they do not simply move to another more hazardous part of Lightwater Road. The displacement of these vehicles will need to be monitored following installation of the restrictions.

Dangerous and illegal parking around schools, particularly at drop off and pick up times, is an ongoing problem, despite schools repeatedly urging parents to park safely outside their schools. Parking on pavements, or on zigzags or yellow lines surrounding schools, reduces space and visibility for drivers and pedestrians, making accidents more likely, especially at busy times. The latest data about child casualties (serious and slight) at school journey times within 250m of school gates showed an average of 50 per year across Surrey.

Schools, councils and the police have taken action in response to complaints from the public. SHBC parking enforcement officers have increased the number of visits to schools around the relevant times to try to educate people and improve parking behaviour, including issuing tickets where necessary. These visits are supported by Surrey Police officers where resources allow.

During the winter term (September to December 2017), 13 Penalty Charge Notices were issued outside schools by SHBC for offences such as parking on zig-zag or yellow lines, with another 32 warnings issued.

Surrey County Council has also implemented new parking restrictions outside more schools to increase safety. However support from parents and guardians dropping children off at school is also required to ensure safe parking every day.

END_OF_DOCUMENT_TOKEN_TO_BE_REPLACED

Surrey Heath Borough Council has introduced another quick and convenient way for customers to pay in their multi-storey car parks.

Glide Parking is a parking payment app, which customers can download on to their smartphones to make payment fast and painless.

Following the recent successful introduction of contactless payment at Knoll Road and Main Square car parks in Camberley, Glide gives customers even more choice when it comes to swift and easy ways to pay.

To create a Glide account, customers can simply download the Glide Parking app from Google Play or the App Store. Paying for parking is a simple three button process to confirm payment. Once payment has been made, there is a 10 minute ‘grace period’ to leave the car park. Free wi-fi in the Mall and Camberley Theatre make using Glide Parking even easier.

There’s also an introductory Glide offer from SHBC car park partner Newpark Solutions – for a limited time customers using the Glide app will receive a £1.40 discount on each parking fee, less a convenience fee of 20p per transaction, making a net saving of £1.20. Where a parking fee is under £1.40, the amount paid by the customer will be a flat rate of 21p. Once this promotion is over, parking fees will return to the standard level.

Surrey Heath Business Portfolio Holder Cllr Craig Fennell said: “The Glide Parking App gives our customers the ability to pay for their parking on the way to their car, avoiding having to divert to a pay station. As well as being quicker for the individual, this has the potential to reduce the queues that invariably form at pay stations during busy periods.”

Newpark’s Managing Director Matt Cook said: “The Glide Parking App is a leap forward for payments in car parks where you pay when you exit. Many people readily have their smartphone to hand, so customers will no longer need to queue at pay stations and search for their payment cards or cash – instead they can just open up Glide Parking on their phone and with three clicks pay for their parking.’ 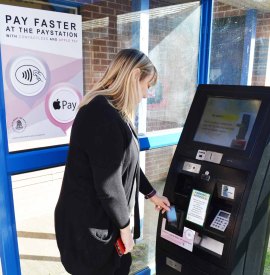 Surrey Heath Borough Council has added Contactless card payments and Apple Pay to their multi-storey car parks. This should speed up the process of leaving the car parks and improve the parking experience for members of the public.

The introduction of these new payment methods is as a direct response to customer feedback following an online survey in July 2016, where almost 60% of respondents said they would like to see Contactless/Apple Pay introduced. Parking Services have since been working with pay station supplier, Newpark Solutions, to upgrade the Fusion car park control system in Main Square and Knoll Road Car parks in Camberley.

With that work now complete, car park users will now be able to pay for their parking quickly and easily using the latest ‘wave and pay’ technology. This should reduce queueing times, especially during busy periods. Traditional card and cash payment options will still be available.

This is the latest in a series of improvements to car parking services offered since the Newpark Fusion ANPR ticketless system was introduced in June 2014, which involves number plate recognition to calculate car park charges. Users can also prePAY for their car parking online – the scheme, which was introduced in August 2015, now has over 400 customers. Visitors to Camberley Theatre who park in Knoll Road car park can also pay for their parking inside the theatre and avoid the rush for the pay stations after each performance.

For more information go to www.surreyheath.gov.uk/parking 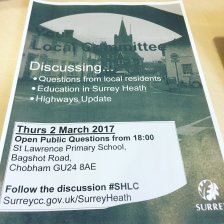 At the Thursday evening – 2nd March – meeting of the Surrey Heath Local Area Committee, held at St Lawrence School in Chobham, the committee noted the response to the petitions from Surrey Highways.

I know the response below was in the committee agenda, which many of you will have read. I just thought you’d want to know that this response was agreed by the committee, without objection.

RECOMMENDATIONS: The Local Committee (Surrey Heath) is asked to note: (i) Residents of Lightwater have met with Officers and Members of Surrey County Council with a proposal to increase the amount of parking in Lightwater centre. (ii) The proposal was reviewed and determined to have a substantial cost implication that cannot be met by the Local Committee in the current financial climate. (iii) Surrey County Council Parking Team will review introducing time limited parking bays within the highway limit during the next Surrey Heath parking review.

REASONS FOR RECOMMENDATIONS: The proposals reviewed by Surrey Highways Officers included works on private land and conversion of footway into carriageway. Both aspects of the proposal have significant financial implications that cannot be considered by the Local Committee at the current financial situation. However, it was agreed that introducing time limited bays at certain points would encourage a regular turnover of vehicles in the centre.

On Thursday, 2nd March this week is a meeting of Surrey Heath Local Committee. It’s being held at St Lawrence School in Chobham. The meeting begins at 6.0 pm with 30 minutes of public questions. View the meeting AGENDA, in which you will see that car parking provision in Lightwater is in the agenda. 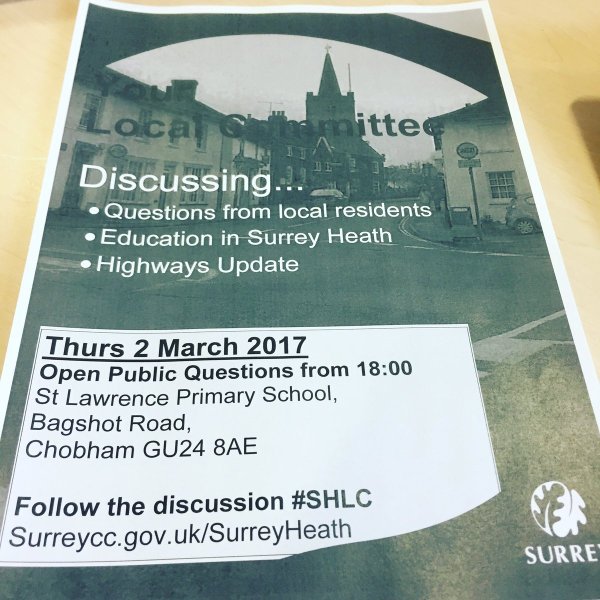 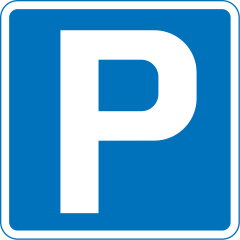 The car park previously offered a maximum stay of up to 18 hours, with the result that local businesses used it for commercial parking. This conflicted with the needs of short stay visitors who wished to use local facilities.

It will now have a maximum stay of five hours free parking, with no return on the same day. The aim is to ensure parking for short stay visits is maximised, encouraging trade, and use of facilities by local residents and visitors.

After consultation with nearby Camberley Indoor Bowls Club, members will receive a number of free permits for the car park. Annual permits will also be available to commuters at a cost of £300.

After agreement at the Executive Council meeting of 12 July 2016, the proposal to reduce the maximum stay was advertised in an Off-Street Parking Places Order in September. One objection was received, which was considered and over-ruled by the Executive at the meeting of 6 December.

Surrey Heath Business Portfolio Holder Cllr Craig Fennell said: “It is hoped that the imposition of this maximum stay period at Wilton Road car park will encourage shoppers and visitors to the area as it will be easier to find free parking nearby.”