This year I’ll be attending the Remembrance Sunday services at St Michael’s Church in Camberley, and at the War Memorial outside the entrance to the Royal Military Academy.

I’ll be missing the service in Lightwater this year. The service by the war memorial attracts crowds of Lightwater residents, where the mix of youngsters and oldsters is a lovely feature of the Lightwater service, as is the Bagshot Brass Band. The band’s playing of the Last Post, followed by Reveille is the poignant part of the service.

Here are a few photos I’ve taken over the years of the Lightwater Remembrance Sunday service. Interesting to note that Lightwater is lucky with the weather, as the sky is blue in each of my photos. I hope it is so tommorrow. [Click on images to enlarge] 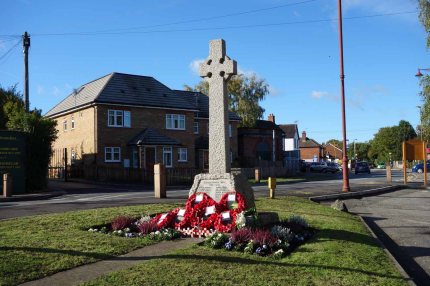 Today was Lightwater Christmas Fayre in the Square. Always well attended, with craft stalls, carol singing, youth dance and music. This year was no different. There were plenty of visitors who braved the little drizzle. They enjoyed the hot mince pies, courtesy of Lightwater Co-op, and mulled wine from the Lightwater Business Association’s tombola stall. A packed Randalls Coffee and Wine Bar was the place to gather hot refreshments of coffee, hot chocolate, or tea.

The performances of the local school choir, and small brass band were enjoyed by the visitors, and were rewarded with sweets from Father Christmas. For those visitors needing something more substantial than a mince pie, rice, curry, and samosas were available from Rano’s stall.

Surrey Heath Mayor, Cllr Dan Adams, opened the fayre, with All Saints’ Church choir and others concluding the fayre with carol singing. Another successful Fayre for Lightwater, despite the drizzle in the early morning.

Awful alliteration, I know, I just couldn’t resist it.

The assembled audience then moved to Lightwater’s village square for the switch-on of the Christmas Lights in the Square, sponsored by Co-op Food, Randalls Coffee and Wine Bar, and the Lightwater Business Association.

We enjoyed the odd combination of mulled wine and samosa. Here are a few photos of the events. Click on images to enlarge. 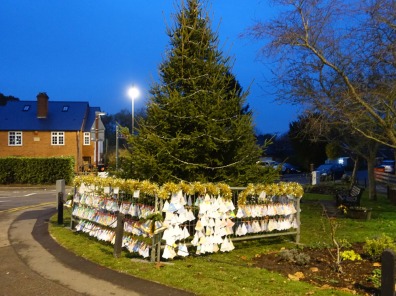 The nation has paid respectful remembrance to all those who served, fought, and died in World War 1. The community of Lightwater turned out in huge numbers to do the same, at the events surrounding the centenary of the ending of WW1.

The key events were led and organised by All Saints’ Church in Lightwater. The main spectacle was a poppy cascade of almost 8000 knitted poppies in front of the Church. The cascade drew many admiring visitors.

All Saints’ Church held a party for the poppy knitters, and an open day for all on Saturday 10th, with a matchless remembrance exhibition in a series of boards about all those named on the Lightwater war memorial, with plenty of other memorabilia on the Great War.

After the end of the Remembrance Sunday service, when almost everyone had left the church hall, and standing on the pavement near the cascade while waiting to be picked up by my dear wife, I watched the passage of traffic. With the sun shining directly into the drivers I saw the driver of one car mouth the word ‘wow’ when he saw the cascade. I’m sure that was everyone’s response. The credit for organising it goes to Carol and Derek Browning, and, of course, thanks to the knitters.

For the Remembrance Sunday service, All Saints’ Church was full to overflowing at and by the war memorial were the largest crowd for the service I’ve seen, estimates are over a 1000. The service was again blessed with bright sunshine, and in the still air The Last Post played, superbly, by the bugler of Bagshot Band was especially moving.

On Sunday afternoon I went to the ‘official’ opening of the WW1 trench in the grounds of Lightwater 1st Scouts. The preceding heavy rain of the previous few days gave the realistic trench the necessary muddy appearance. I’ll post a short video of this later. [Click on images to expand]

In conclusion, Lightwater, you played your part in the remembrance of centenary of WW1, and splendidly so. 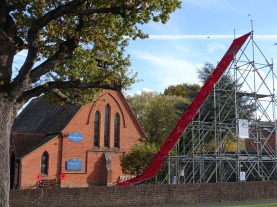 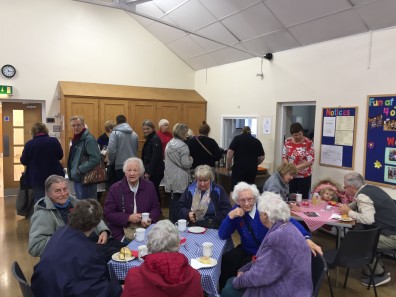 Yesterday I said I provide a video of the spectacle that is the poppy cascade at All Saints’ Church in Lightwater.

Also yesterday, many of those who knitted the poppies were treated to afternoon tea at the All Saints’ Church Hall. It is fitting that they feature at the beginning of the short video.

The sun shone directly into my camera, meaning the colour of some of the poppies a bit washed out. I shouldn’t complain about the sun, it’s good when it shines. So that you get the full effect of the cascade I’ve posted a few photos. The video appears after them. Good to see that local building firm, Kircher Building Services sponsored the scaffolding.

I mentioned, earlier this week, about the poppy cascade at Lightwater’s All Saints’ Church. Visitors can take a close look at the completed cascade, and view the Remembrance Exhibition information boards at an open to all event in the Church Hall, between 10.30 am and 4.0 pm this coming Saturday. Refreshments available.

I’ll post a video of the cascade here tommorrow.

There’s Lightwater’s own contribution to the Remembrance Sunday events with a service in All Saints’ Church on Sunday, beginning at 10.20 am, followed by a procession along All Saints Road to the War Memorial, where there will be a short service at 10.50 am and the laying of wreaths.

Here’s a photo I took earlier this week of the preparations to host a huge poppy cascade at All Saints’ Church in Lightwater. When last I heard they had well over 10,000 knitted poppies.

In June this year, I wrote about Lightwater’s All Saints’ Church impressive poppy cascade, in which I included a short video of the beginnings of the cascade, and an interview with Carol and Derek Browning.

It’s over a year now that Revd Derek Browning, Hon Curate of All Saints’ Church in Lightwater, wrote about a cascade of knitted poppies in the Roundabout Lightwater parish magazine.

Derek, also being Chaplain to the Windlesham branch of the Royal British Legion, suggested that a cascade of knitted poppies would be a special way to mark the commemoration of the 100th anniversary of the end of World War I on 11th November 2018.

At Lightwater’s recent village fête All Saints’ Church had a wonderful display of information about the men of Lightwater killed in the First World War. What stood out was the display of some 750 knitted and crocheted poppies made into two large poppies hanging from the chancel arch.

The display contains just a quarter of the poppies knitted so far. Derek’s hope has surely been met that the communities of Bagshot, Lightwater, Windlesham, and beyond could be encouraged to knit poppies for a large cascade to be hung outside at the front of the church for the lead up to this year’s armistice commemoration.

We attended the fete, and saw the magnificent poppy display in the church. Knowing that this was a temporary display I felt an urge to record the event on video, and to speak to Derek and his wife Carol. Not my best video, but important to record a special one off event, however amateurish on my part.