I thank you for visiting here in the past year, and for leaving comments. I wish you Happy Christmas and a New Year full of happiness, peace and fulfilment.

I considered leaving a Christmas Card here over the festive period during this blog’s off duty period.  On reflection this photo that I took in the year is, I think, one of peace and contentment, which is what I wish for you and yours this festive season.

The first will be at the beginning of my last meeting of the full council of Surrey Heath Borough council – I’ll post it here tommorrow. Best not to tempt fate. Later in the evening, as Vice President of Camberley & District Probus Club, I’ll be offering up the toast to the guests.

I’ve written both my speeches, and practised them too. I don’t, though I wished I had, the memory or confidence to deliver them without having the speech in writing. Nerves are quelled by having what I’m intending to say written down – though even then I don’t always get it right.

Listening to Jonathan Aitken talk last night at St Paul’s Speaker’s Corner was inspiring. He talked engagingly, with occasional humour, and without notes, or any um’s and aah’s. He looked directly into the eyes of the audience throughout, and generously answered every question with respect to the questioner. Makes you realise what a skill this is, and the mental prowess it exhibits.

All I’ll just have to do is to make sure I reach into the correct inside jacket pocket for the appropriate speech.

Please indulge me for a brief moment. March 28th 2007 was the date of my first entry on this blog, which means I’m now writing here into the ninth year. Crumbs, this is my 4,515th article – never thought I’d still be at it, or that now around 11,000 views per month found stuff of interest.

I should thank those readers of this blog who occasionally introduce themselves, and encourage me to carry on.

Perhaps I should’ve mentioned this before. I’m not a candidate for Lightwater in the upcoming local elections for Surrey Heath Borough Council. I’ve been delighted to be able to represent Lightwater for two terms – meaning 8 years.

The first entries in this blog were on March 29th 2007, and in the second entry – Why stand for office for the first time? I provided a bit of self-analysis, feeling I needed to tell people something of my views and outlook on life. I didn’t say why I wanted to be a councillor. The reason can be thought a little trite. I wanted to repay the village for being a happy place to live for 20 years previously, having worked long hours with plenty of unlovely business travel.

The remaining blogs in March 2007 were all about potholes, the reporting of them and my simple pleasure in seeing them being fixed. As I walk to the village, occasionally using Red Road, I pass by my very first pothole report. I look on it with affection – yes, yes, quirky I know. I’ll resist the temptation to add its photo here.

The tough question to answer is what have I achieved in 8 years as a councillor? Primarily to keep the needs of Lightwater at the forefront of the Council’s mind. Also, a relentless focus on the improvement in Lightwater’s flooding resilience, which I think has been a success. Any other achievements are much harder to quantify and even harder to claim any credit.

Enough – in a few weeks I’ll be off the council, though will find it hard to give up reporting on potholes and failed streetlights.

Oops, almost forgot. Being the Mayor for one year was a high point, and so rewarding meeting the volunteers for their communities in the Borough.

I know a numb face from a visit to the dentist shouldn’t affect my brain or fingers – but any excuse to be diverted I’ll grab.

I could have told you about our appearing on TV last night. Though thought it might be a bit self regarding.

We were the potential property buyers in episode 7 of  ‘Selling Houses with Amanda Lamb’ on the More 4 channel.

Filmed late last year, we helped out an estate agent friend who’d been asked by the programme makers who were desperate for a couple of likely buyers. I could give you a detailed commentary on the day, but that would be boring. Suffice to say it was a long and tiring day, with no reviving cups of tea. Oh, and just a sandwich for lunch.

What was interesting, to me rather than Jany, was the process of making a TV programme. There were three camera men, one sound recordist, a director, and a runner. I guess it’s an item ticked off our ‘bucket list’, a.k.a. things to do before you die.

If you really want to see us on TV, the programme is repeated today at 1.15am. 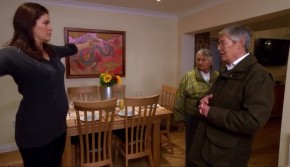 Amanda laughs at my joke

Could this be my office

Discussing the qualities of the bedroom

Looking into an Estate Agent window in Chobham 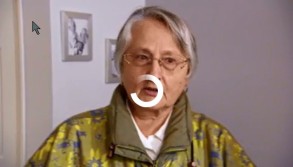 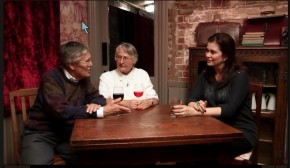 Offering our views on the houses we viewed

It’s Breast Cancer Campaign’s Wear it Pink day tommorrow. We’re away for this year’s celebrations on Friday 25th October. I’m sure Paul Deach will contribute to a notable fund raising event at Oyster’s Fish & Chips in Lightwater on the day.

Even though I wore my pink bow tie for the 2012 Oysters Fish & Chips Wear it Pink Day, I’m prevaricating on reverting to wearing a bow tie. I began wearing a bow tie in my late teens. Then after a longish period not wearing one, I became a regular bow tie wearer in the 1980’s and 1990’s. Only occasionally since have I worn one of my many, many bow ties.

It’s pleasing to learn that there appear to be reasons to wear a bow, as Michael Hebert recommends, especially if you’re a doctor. Although Michael says, “It is strange to think that in our society, the guy who wears a bow tie is now the rebel.”

The Daily Telegraph columnist Tim Stanley agrees, writing in a lengthy article that wearing a bow tie also signals rebellion. He neatly sums up the psyche of bow tie wearing as follows,

“They also spoke to a conservative rebellion against vulgarian culture: a refusal to be blandly egalitarian. They’re jolly difficult to tie, which means that the effort to put one on adds a degree of philosophy to the dressing process. There’s a Taoism to bow tie wearing: one has to be in the right mind to put one on and carry it off. That requires a close shave, a clean shirt, well managed hair, shiny shoes and a jacket carefully chosen to give prominence to the tie. Throw one on haphazardly and you’ll look like an urbane tramp.”

What’s happened to that rebellious nature of mine? I’m not sure, and that’s the truth.

I’m still banished from the interior comforts of the house to my garden office, because the carpets need 24 hours to dry before furniture and stuff regains its natural place.

New Look Carpet Care of Lightwater did a brilliant job in cleaning our carpets and rugs. All day yesterday, and today too, we’ve been walking in the house with plastic covers on our shoes.

Meanwhile, the cleaning specialist suggested that using an office chair with wheels in the study wasn’t good for the carpet. Therefore, it was a chance to regain a chair for my garden office. I wasn’t careful in moving it and left a nasty dirty mark on our nice clean carpet. Frosty look from dear wife, who called me careless. True.

A short spray of the potion left for such circumstances, and all’s well. I just hope that the next accident isn’t by me.

I’ve come through a period of reassessment about my digital life and associated stuff. The sudden death of my oldest friend fed into doubt about the value of my writing here. Confidence is now regained.