The Boundary Commission for England proposals, viewable from today, maybe not the hottest topic for the general public, What with more people interested in GBBO’s likely move to Channel 4, the Archers court case result, the weather, and David Cameron’s swift exit from Parliament.

However, the Boundary Commission for England’s proposals will rumble on in political circles for months, and months to come.

Do the proposals affect Surrey. Not a great deal. See what’s proposed at Initial proposals for new Parliamentary constituency boundaries in the South East region. In short, they’re not proposing changes to the number of constituencies, only moving wards in some constituencies to balance the number of electorates per constituency. Here’s what they say about Surrey Heath,

Here are the tables from the Appendix in the report of ward sizes – first table is Woking, and the second is Surrey Heath.

I liked Professor Vernon Bogdanor’s lecture on ‘The Queen at 90′ so much I’m posting another of his lectures.

This is his lecture on ‘Europe and the Sovereignty of the People’, delivered on 30 June 2016 at Europe House, London, under the auspices of Nuffield College, Oxford, and filmed by the BBC Parliament Channel.

Sadly, I’ve not been able to find it on iPlayer in BBC Parliament Briefings as I had for The Queen at 90. So the transcript, below, will have to do. It’s an entertaining and hugely informative review of how referendums fit into our Parliamentary democracy. For example, Prof Bogdanor says,

This week I listened to a lunch time talk given by the Rt Hon Anna Soubry MP, Minister of State for Small Business.

This got me thinking about the number of personable, capable, and intelligent women in government at present, each of whom I’d be happy see given more important roles in government. Here’s my list, Theresa May, obviously, Andrea Leadsom, Priti Patel, Penny Mordaunt, Theresa Villers, Therese Coffey, and of course, Anna Soubry.

Hope you won’t mind. But I did manage to have my piccy taken with Anna.

Today, the House of Commons Library released a Briefing Paper, Constituency boundary reviews and the number of MPs.

This paper announces the commencement of a review of parliamentary constituencies to be concluded in 2018. The Briefing Paper states that,

The Boundary Commissions launched their reviews on 24 February 2016. They confirmed the electoral quota for the 2018 Review is 74,769. This means constituencies must have an electorate between 71,031 and 78,507.

An earlier House of Commons Library Briefing Paper has the sizes of constituency electorates  the 2010 general election. Looking through the list, one quickly sees that some are in the high 80,000’s, while others are in the mid 40,000’s.

Hence, again from today’s Briefing Paper, an explanation of the reason for the change,

The new rules were intended to create equally sized constituencies, so that one vote counts for approximately the same, no matter in which constituency it was cast.

Lewis Baston, political analyst in The Times, in Bonfire of the Boundaries, has created this table of how changes in share of seats might affect political parties,

In yesterday’s business in Parliament an MP presented ‘a Bill to provide for an English National Anthem for use at sporting events that involve individuals or teams representing England; and for connected purposes’. See Hansard report HERE for the short debate.

The Bill bestows a duty on the Secretary of State for Culture, Media and Sport to hold a consultation across England that will decide what the English national anthem should be. The Bill passed its first reading, and its second reading will be on Friday 4th March.

There are various opinion polls being run in different sections of the media. Guido has a list, as does the Daily Telegraph, and The Guardian has a humorous list. These seem popular choices,

I’m rather fond of I vow to the my Country, but reckon that the popular groundswell of opinion would be for Jerusalem. Whatever, this Bill has only just begun it’s journey through Parliament, and may well never pass into law.

Households in Surrey Heath will have received a form asking residents to check whether the information that appears on the electoral register for those living at their address is correct as part of Surrey Heath’s annual voter registration canvass.

The aim of the form is to ensure that the electoral register is up to date and to identify any residents who are not registered so that they can be encouraged to do so.

With Police and Crime Commissioner elections taking place across Surrey in May 2016, this is an opportunity for residents to make sure that when the elections take place they will easily be able to take part.

Karen Whelan, Electoral Registration Officer at Surrey Heath Borough Council said: “Anyone that wants to vote must be registered. To make sure you are able to have your say at the elections next year, simply check the form when it arrives and return it as promptly as possible.

“If you’re not currently registered, we’ll send you information explaining how to do this or you can just go online to apply to register at www.gov.uk/register-to-vote .”

It’s particularly important that anyone who has moved address recently looks out for the form and checks whether they are registered.

Any residents who have any questions can contact the elections team on 01276 707165.

I had some time at the end of the day on Tuesday when in London, and being near the Houses of Parliament I thought I’d see the latest statue in Parliament Square – to Mahatma Gandhi.

Gosh, it’s looking so much better since Brian Haw’s protest camp was demolished.  The flower beds make the square attractive. The statues of Churchill, Mandela, and Gandhi attract visitors, who enjoying having their pictures taken by them. I like the approachability that the Mandela and Gandhi statues offer. There can’t be many who recognise the other statues in the square. With new flagpoles and statues, it’s worthy of being next to Parliament. Personally, I’d like to see benches and rubbish bins in the lawn in the square – but, sadly I imagine security considerations limit their use.  Here are my photos of the statues. 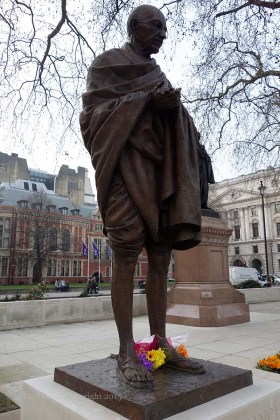 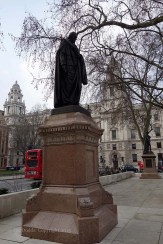 I haven’t seen the Channel4/Daily Telegraph entrapment of Jack Straw and Sir Malcolm Rifkind. Though like many I’ve seen and read about the relevant snippets in the media.

The impression they both gave in the video’s and their subsequent interviews was of an over weaning sense of self importance, and entitlement. It’s an ignominious end to both of their political careers. Neither now can expect elevation to the House of Lords.

Just goes to show, as both were past Foreign Secretaries it’s always better to leave when you’re at the top. Now they leave Parliament as disgraced MP’s.

One noticeable change in politics, is the imposition of rapid justice. Both were quickly cast adrift by their parties and both are leaving Parliament in a matter of months. As long as it’s fair, I like rapid justice. Pity we don’t have more of it, harsh though it may be.

Ed Miliband this week spoke at how society, he suggested, works for the ‘privileged few’. He also alluded to what he claims are vested interests, having previously suggested hedge fund managers and political donors are one such.

There was another speech this week, from a hedge fund donor to the Conservatives, making his maiden speech in the House of Lords in a debate on Women: Homelessness, Domestic Violence and Social Exclusion in which Michael Farmer said,

“….. I will give three brief facts of my career. I started work at 18 as an £8 per week difference account clerk in a London Metal Exchange member firm; I became a Christian when I was 35; and in the last ten years I have been an active supporter of the Centre for Social Justice, especially of their policies which support families.

However, the background that I would emphasise to your Lordships is my sister’s and my childhood. We were born at the end of the war, and both our parents were alcoholic. My father died from this when I was four, and violence was a part of that backdrop. We were soon bankrupt and, with a mother still struggling with drink, my sister and I experienced the poverty, neglect and shame that are such potent drivers of social exclusion.

I benefited from attending the boarding house of Wantage state grammar school, and in this context I welcome the Prime Minister’s determination to help more looked-after children gain places at today’s state boarding facilities. A good education is invaluable for social mobility; hence I am a sponsor and governor of ARK All Saints Academy in Camberwell.

My sister was not so fortunate; she left school at 14 and, in her subsequent years, struggled with broken relationships, alcoholism and depression. I am telling your Lordships this not only to explain why my heart and head would wish to be involved in today’s deliberations, but also to come back to that House role of scrutiny and opinion revision when we consider one another. ….”

Iain Martin writes a blog on politics for the Daily Telegraph. Iain’s a writer I respect, never slavishly following a party political line, and having an acute ear for the dynamics of modern political thought and presentation.

I’m pleased to see he’s another political commentator having a stab at resolving the West Lothian Question. Good on him. Links to other commentators ideas can be found HERE, and HERE.

Iain’s blog post ‘English votes for English laws can work. Here’s how’, is worth a read. Iain says ‘compromise and maturity’ are need to make it work. Isn’t that what we British are supposed to have. Whatever solution we end up with, I agree with Iain it will require generosity of spirit and flexibility to make it work, sadly not always a common commodity.