This may seem an arcane topic. Well, it is, I admit. While idly reading items on Twitter, which is something that I really should stop doing. I blame Brexit for taking over my reading habits.

Anyway, onto the story. 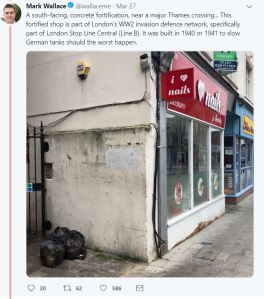 Mark Wallace – @wallaceme – a Kingston on Thames resident having studied archaelogy, and a regular walker in his area, spotted a piece of of Second World War defence fortification. Not at all obvious to anyone walking by the Nail Bar in St James’s Road.

Mark in his interview by the Surrey Comet, describes his uncovering of the fortified wall.

The structure at the Nail Bar is hangover from the defences created for the WWII  London Stop Line. These were hastily created fortified defences. The outer wall of the Nail Bar has three loopholes in it, now bricked up, which were firing positions, part of the protection of the bridge over the River Thames.

There are many such quirky such fortifications around the country. Mark Wallce used the Archaeology Data Service to verify his finding.