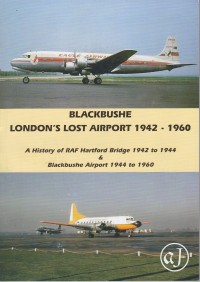 The book entitled Blackbushe – London’s Lost Airport 1942-1960 by Robert Belcher records the history of RAF Hartford Bridge and thence Blackbushe Airport. It was the subject of a fascinating lunchtime talk at a Camberley and District Probus Club monthly lunch club meeting, recounting the eventful history of the airport. [Click on images to expand].

The A30 running from Bagshot to Hartley Witney goes through Hartford Bridge Flats, a somewhat desolate area of unimproved and barren heathland. The Flats were requisitioned by the Government in October 1941 as the base for a military airfield.

RAF Hartford Bridge opened in November 1942 and soon after became a base for a photo reconnaissance squadron. The airfield became increasingly busy during the war years, requiring closure of the A30 road, often for days. Looking at the map of the airfield, – below – it shows that runway 01/19 crossed the A30.

At the end of the war the government, looking at the future of civil aviation in the country, decided to invest in Heathrow as the main London airport, moving away from Croydon. In the years up to the late 1950’s Blackbushe was used as a diversion airport for Heathrow, and was also used by BEA [now part of BA] for pilot training. It was also a major base for the US Navy who carried out clandestine spy flights from this civil airport.

The airport’s heyday was between 1955-59, when it was the base for a number of civil airlines, such as Eagle Airways and Dan-Air Services, Silver City, and others.

In discussions, again at government level, as to where the second London Airport should be sited, Blackbushe lost out to Gatwick. Blackbushe was considered to be hampered by its closeness to Farnborough and Odiham, and that it also required significant investment in infrastructure, the airfield having only been considered to be a temporary wartime airfield.

Having lost out to Gatwick the airport was cited for closure in 1959, and much of the infrastructure was quickly demolished in 1960, and some of the runways were removed, with the land being handed back to its original owners.

In 1961 Blackbushe was reborn to be the small airport it is today.