My part in this lovely story is small, though important. I photographed a Belsize car at the 2014 Bisley Strawberry Fayre. It had recently been bought by Tim Price, a Bisley resident. and he was displaying it at the Fayre. I do try to add a description to my photos, which I hope adds a bit of interest to the photos.

It’s this little bit of added information that turned out to be valuable. Now, Belsize cars aren’t common, the manufacturer having going out of business in 1925. Alan Ray, a car restoration enthusiast in Australia, acquired a Belsize car in need of restoration, believing that there were only two in Australia, Alan looked for information and assistance from Belsize owners in the UK. Doing a Google image search, Alan saw my photo, which then led him to track down Tim Price, and eventually to arrange to meet him to see the car.

That meeting was this week. I met Alan Ray, and his charming wife Annie at Tim Price’s home in Bisley to see the Belsize car. I recorded this brief interview with them all. 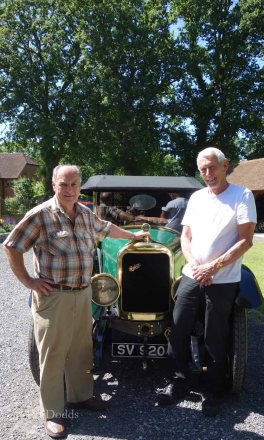